07 Jun 2016 What would football be like without voluntary standards? AFNOR responds in humorous style 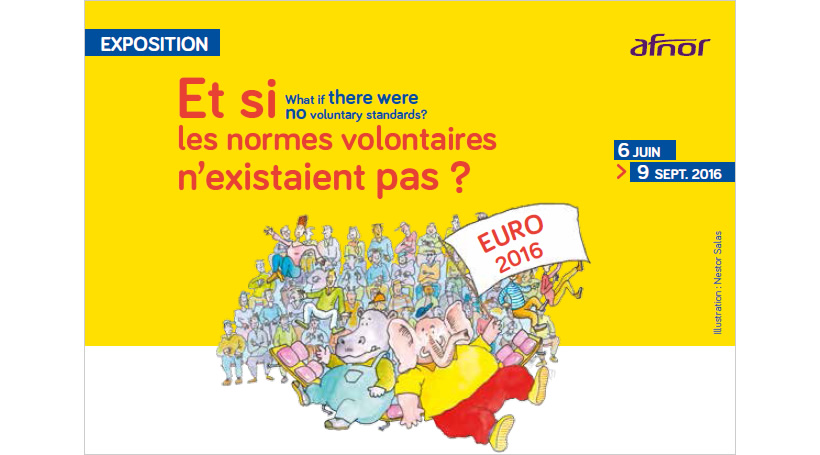 Posted at 08:14h in News by MARIE-CHRISTINE

From 10 June to 10 July, spectators expected at the Stade de France for Euro 2016 will find 14 original large scale sketches displayed outside the AFNOR building on Plaine Saint-Denis, ideally located between the stadium and the RER B train station. Illustrator Nestor Salas has imagined some absurd situations that would be unthinkable on a football pitch or in a stadium, thanks to voluntary standards.

Different-sized goals, overly long grass, a poorly lit stadium … without voluntary standards, football matches in all countries would take place… without a level playing field! To emphasize this point, AFNOR is staging an exhibition of humorous drawings on the railings outside the AFNOR head office, just a stone’s throw from the Stade de France. Euro 2016 is seen as a great opportunity to present voluntary standards in a whole new way, and so why not with humour? The result is an original and educational way of conveying what voluntary standards are all about and shattering misconceptions about them being restrictive, mandatory and even regulatory.

Alongside the AFNOR building on Plaine Saint-Denis, supporters and passers-by making their way between the RER B station and the Stade de France will come across 14 original signed drawings by the illustrator Nestor Salas with captions in two languages (French and English), to remain on display until 9 September 2016. The exhibition will also be viewable on the website www.exposition.afnor.org .

Just like football, standardization is a team game. Over 20,000 professionals are involved each year, with the aim of enhancing the level of their product, service, or organization, for the good of consumers. The voluntary standards themselves are based upon the responses provided by a whole host of industrialists, service providers, trade federations, consumers, NGOs, public bodies, etc., who share the benefit of their experience, know-how and expertise in order to arrive at the best possible solution for all economic and social stakeholders from the sector concerned. Once a consensus is established and the text adopted, the standard is published and possibly extended to European or international level.

In the world of sport and leisure, nearly 400 voluntary standards are updated on a regular basis, with the involvement of all interested countries so as to ensure they are ever more effectively fine-tuned to the expectations of the majority.