30 Mar 2016 Standardization: a real asset for organizations that adopt the approach 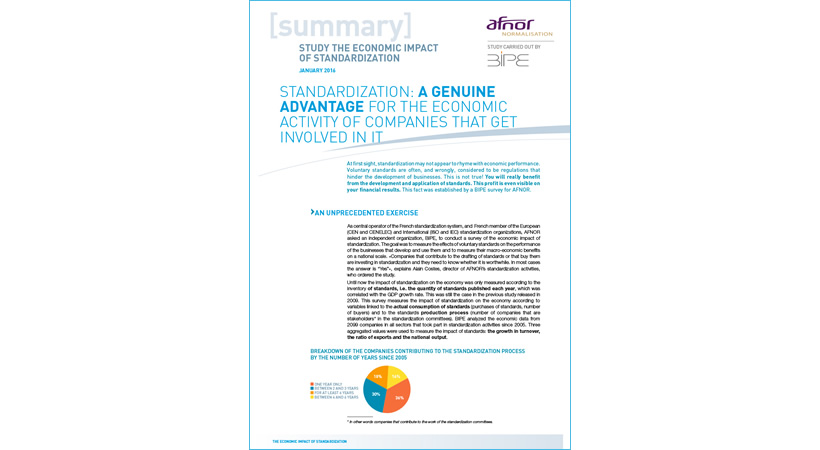 When an enterprise participates in the development of voluntary standards and applies them, it derives a real benefit. That benefit can even be seen in its turnover. This is demonstrated in an exclusive study by BIPE (Office for economic information and forecasting) for AFNOR.

When an enterprise participates in the development of voluntary standards and applies them, it derives a real economic benefit. This is demonstrated in an exclusive study by BIPE for AFNOR. “Enterprises that get involved in writing standards or purchase them need to know if the result is worth the effort. And it transpires that the answer is a resounding yes,” sums up AFNOR Standardization’s Director Alain Costes, who commissioned the study.

The benefits are reflected in three figures:

+ 20% : the additional annual growth in turnover observed in enterprises involved in standardization committees. They record an annual growth rate of 4% compared with 3.3% on average for all enterprises, whether or not involved. In other words, taking part in the standardization process opens up markets, enabling an organization to be in the right place at the right time and with the right product or service.

+ 19% : the additional export turnover observed in enterprises that purchase standards or take part in standardization committees. Their export rate is 18.2% as opposed to 15.3% for all enterprises. In other words, a standard can act as a passport to better sales outside an organization’s borders. Across all countries, voluntary standards open up doors to interoperability between various stakeholders offering different products and services. The example of containers is a case in point: if the dimensions of a container were not standardized, then world trade would not be as strong!

+ €15 billion : the annual contribution of use of voluntary standards to production (2013 data), based on the total turnover of all French enterprises. In other words, if these enterprises did not apply standards for their products and services, they would sell less and therefore produce less. Ultimately, the result is worth the effort: getting involved in standardization is an investment that truly pays off!

Another point: whether relating to goods or services, voluntary standards help an organization to optimize use and maintenance of its facilities by harmonizing production tools over its various sites. They also offer the opportunity to monitor and thereby reduce certain consumptions (water, energy) in the case of standards on environmental and energy management systems. The enterprise therefore reduces its costs.

Complete this form to obtain the summary of study…