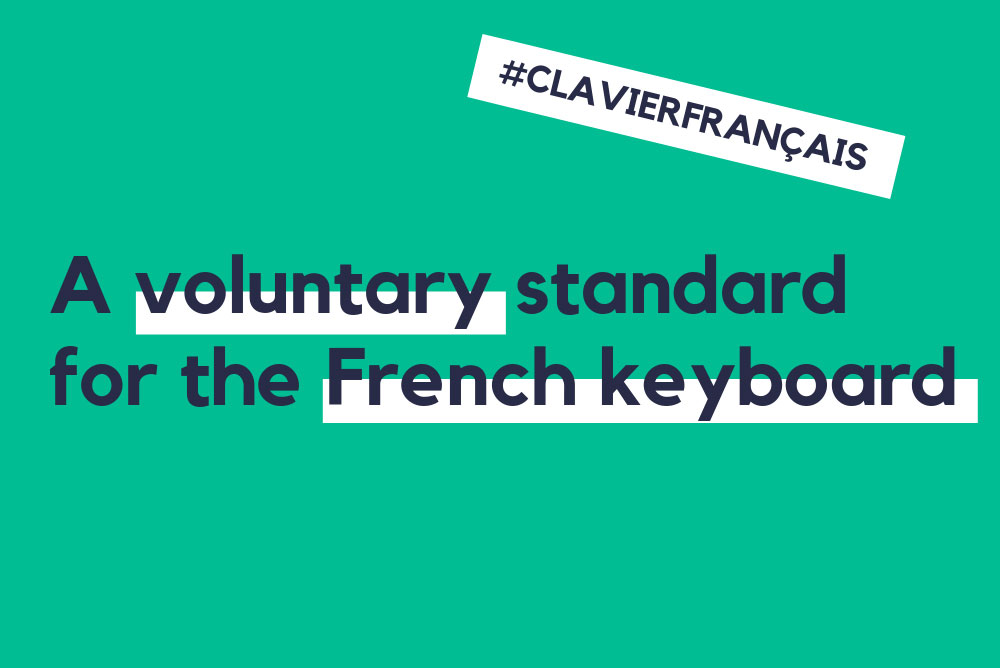 Posted at 09:37h in DIGITAL TECHNOLOGY, News by admdcom

Improving ergonomics and making it easier to write French and regional European languages: this is the twofold aim of a voluntary standard for the French keyboard, published by AFNOR.

Did you know that writing French capital letters without accents is considered wrong and can create confusion? This is one example of the bias caused by flaws in the AZERTY keyboard model, which takes its name from the first six alphabetical keys on the keyboard. Some very common characters in the French language are missing from keyboards – for example, the ligatures æ in et cætera (“et cetera”) or œ in œuf (“egg”). Others are hard to find or simply absent, depending on the operating system. This is the case, for example, for capital é and ç.

Current AZERTY keyboards also limit the ability to type in regional languages. In Occitan, you need to be able to add acute and grave accents to all vowels, which is currently a difficult task using a basic keyboard; in Catalan, the interpunct must be accessible, while Breton and Corsican require the use of the tilde for ñ. In a context of European openness, it was therefore becoming urgent to facilitate writing languages using the Latin alphabet: the German ß (eszett), the Spanish or Portuguese tilde, inverted question or exclamation marks, the slashed ø for Danish and Norwegian, and so on.

These findings, shared in 2015 by the General Delegation for the French Language and the Languages of France[1] (DGLFLF, French Ministry of Culture), prompted the launch of a project entrusted to AFNOR: bringing together the stakeholders who could define optimal arrangements for typing more easily with a keyboard. To complicate things, since there’s no standard AZERTY model, designs vary from one keyboard manufacturer to another and from one operating system to another. The @ and € symbols, for example, are not always displayed in the same place.

After more than three years of work and a public enquiry that gathered thousands of comments that are summarized in the final document, AFNOR is now publishing the results of this collective project: a voluntary standard that addresses all the issues identified by delivering a set of specifications that will allow operating system developers and keyboard manufacturers to adapt French keyboards, without revolutionizing them. Voluntary standard NF Z71‐300  lays out character provisions and engraving rules for the creation of characters and symbols.

The NF Z71‐300 standard proposes two keyboard models, each offering the same writing possibilities, but geared towards different audiences and uses. The first is an optimized AZERTY model. The 26 letters of the alphabet and the numbers stay in the same place, but some other symbols don’t, such as certain accented vowels, the @ sign, some punctuation marks, the number sign (hashtag), currency symbols, and curly brackets.  It will thus be easy for users interested in this new configuration to get used to these changes.

Optimized AZERTY keyboard model (Note: The graphic shows only the characters visible on the keyboard; other characters are available with keystroke sequences.)

The second model proposed, called BÉPO, is already commonly used among a community of enthusiasts. The project was an opportunity to increase the possibilities offered by the dead keys, and have no impact on the key engravings. This model is now recognized as offering the most ergonomic and efficient layout possible for typing French and other Latin alphabet languages, but also for programming.

Optimized BEPO keyboard model (Note: The graphic shows only the characters visible on the keyboard; other characters are available with keystroke sequences.)

A new market for manufacturers

The NF Z71‐300 standard is now available to keyboard manufacturers who would like to offer new models on the market. They are free to comply with it, bearing in mind that their corporate and public sector customers could make it a prerequisite in their calls for tenders when replacing office IT equipment.

Consult the press kit on the French keyboard (French)

AFNOR is the benchmark French body for voluntary standards. It manages the collection of existing documents and coordinates and supervises the work of those engaged in their revision or cancellation, as well as conducting preparatory work in areas likely to give rise to the development of new standards. Market stakeholders drive the creation of voluntary standards. These standards provide a reference framework that sets out to offer guidelines, technical or quality specifications for products and services, and best practices serving the general interest. Everyone can take part in their development, and any organization can elect to use and refer to the standard. They are voluntary, after all. As the French coordinator of standardization, AFNOR declares one sole ambition: to contribute to the dissemination of best practices and effective solutions for the benefit of all. https://normalisation.afnor.org

[1] Consult the 2015 “Report to Parliament on the use of the language”, page 51, “Towards a French standard for computer keyboards?”