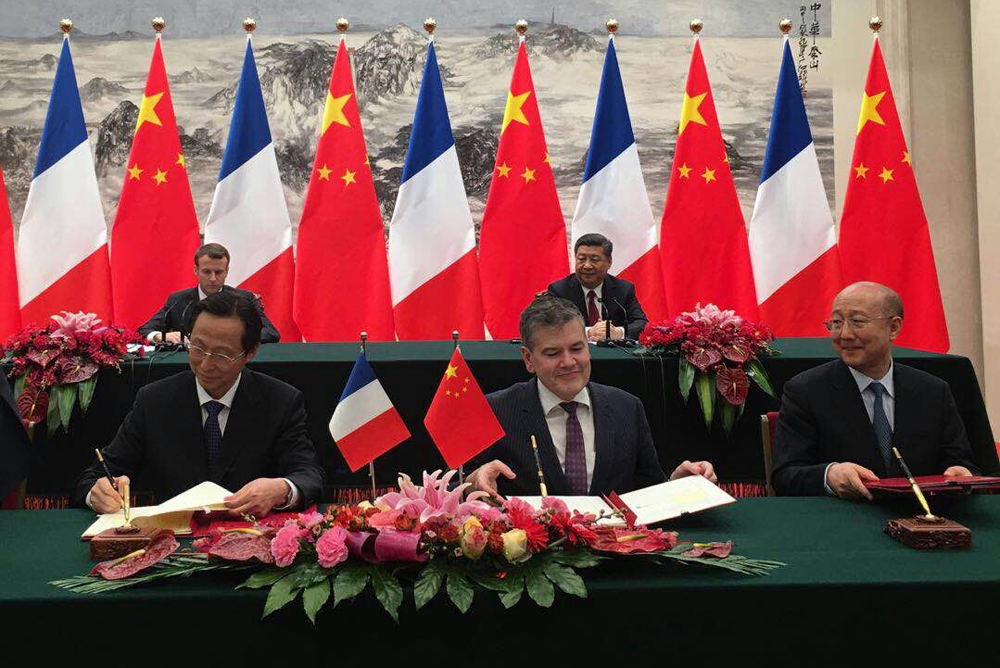 To coincide with the French President’s visit to China, AFNOR and its counterpart, the SAC, renewed their cooperation agreement to develop voluntary standards in strategic sectors. On the agenda: e-commerce, e-manufacturing and climate.

Between France and China, it’s a two-way street. On Tuesday 9 January 2018, Olivier Peyrat, Director General of AFNOR (in the centre of the first row in the photo), and Zhi Shuping, representative of the AQSIQ, the supervisory authority of the SAC (Standardization Administration of China, AFNOR’s Chinese counterpart, on the right in the photo), renewed their cooperation agreement to jointly develop new voluntary standards. This took place in an elite setting: the meeting held in Beijing between the French and Chinese heads of state, Emmanuel Macron and Xi Jinping, accompanied by a delegation of entrepreneurs. This presidential involvement follows on from the cooperation initiated in 2013; François Hollande was then the French President and he signed an initial agreement on his second state visit in 2014.

The 2018 agreement introduces new, strategic topics to the French-Chinese partnership on voluntary standardization: industry of the future, e-commerce, and the fight against global warming, in response to the One Planet Summit of 12 December 2017, a post-COP23 event that highlighted the role of voluntary standards in terms of climate finance and the measurement of greenhouse gas emissions.

The first two topics were the focus of the second Franco-Chinese standardization meetings, organized in Paris in April 2017, a year and a half after the initial meeting in Beijing. The final topic, climate, has received significant media coverage since Presidents Macron and Xi Jinping took an offensive stance in terms of the fight against global warming, going against the United States, and its withdrawal from the Paris Agreement. On Thursday 11 January Olivier Peyrat was scheduled to meet with the leaders of the ISO/TC 307/SC7, the international committee working on methods of quantifying greenhouse gases, with a Chinese secretariat.  It should be noted, in this respect, that France and China are among the top 5 most influential countries in the International Organization for Standardization.

One of the areas subject to joint standardization between France and China is sustainable cities, a key topic of discussion in Paris in April 2017. This is a direct example of the climate focus of the meeting agenda: following the example of voluntary international standard ISO 37101, the voluntary standards establish a common language, standardized working methods and jointly recognized good practices, to build and manage cities in accordance with sustainable development.

As proof of confidence and guaranteed interoperability of products and services, voluntary standards are more generally considered as valuable tools to secure export markets, an objective shared by many French entrepreneurs in China, and Chinese entrepreneurs in France. On 9 January in Xian, President Macron spoke in favour of stimulating partnerships and economic exchanges between the two countries, in fields in which the “growth boosting” capabilities of voluntary standardization have been proven: energy transition, the silver economy, food processing, and digital – particularly artificial intelligence.