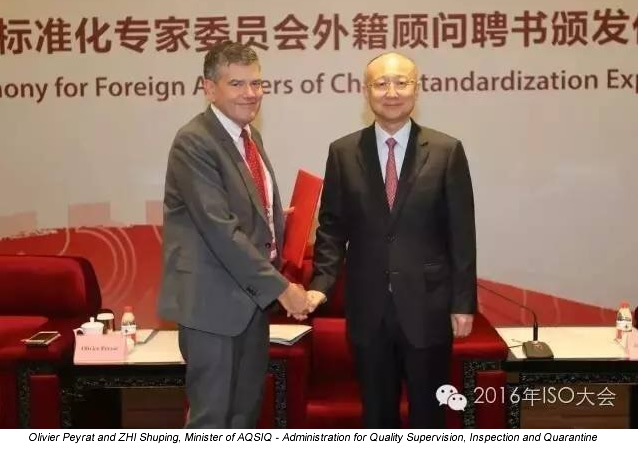 Posted at 13:29h in News, Other by MARIE-CHRISTINE

Olivier Peyrat, Managing Director of the AFNOR Group and ISO Vice-President Finance (International Organization for Standardization), is appointed Standardization Advisor to the Chinese Government. He will bring to the role his expertise and knowledge of the processes involved in international standards development.

The French group AFNOR designs and deploys solutions based on voluntary standards. With an international presence supported by a network of 38 offices, the group maintains close relations with China aiming to promote standardization and its connection with quality and certification. It has been present in China since 2005.

At the ISO (International Organization for Standardization) General Assembly held in Beijing in mid-September, Olivier Peyrat, Managing Director of the AFNOR Group and ISO Vice-President Finance, was appointed Standardization Advisor to the Chinese government.

France, together with China and other major contributing countries, spearheads standardization initiatives that form the basis for development of international voluntary standards. Notable examples are French standards published on sustainable procurement, improving reliability of online consumer reviews and the quality and safety of electronic cigarettes and e-liquids.

The shared resolve to strengthen still further bilateral relations and mechanisms for dialogue on standardization, thereby benefiting the economies of both countries, were formalized in two agreements signed with the SAC (Standardization Administration of China, AFNOR’s Chinese counterpart) in 2013 and AQSIQ in 2014 with the backing of the Chinese and French Heads of State, Xi Jinping and François Hollande.

The collaboration between the two countries has already been demonstrated in a great many subject areas such as urban development and tourism. The initiatives are broadly scoped and most importantly are part of a long-term commitment. In the area of standards-based certification, regular contacts have also been developed with the Chinese certification authorities, the CNCA and CCAA.